Go to Top
Break for Music

Unpacking the Science: How Playing Music Changes the Learning Brain 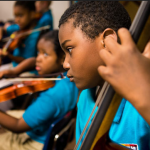 “(…) Ani Patel, an associate professor of psychology at Tufts University and the author of “Music, Language, and the Brain,” says that while listening to music can be relaxing and contemplative, the idea that simply plugging in your iPod is going to make you more intelligent doesn’t quite hold up to scientific scrutiny. “On the other hand,” Patel says, “there’s now a growing body of work that suggests that actually learning to play a musical instrument does have impacts on other abilities.” These include speech perception, the ability to understand emotions in the voice and the ability to handle multiple tasks simultaneously. Patel says this is a relatively new field of scientific study. (…)

In addition, Patel says music neuroscience research has important implications about the role of music in the lives of young children. “If we know how and why music changes the brain in ways that affect other cognitive abilities,” he says, “this could have a real impact on the value we put on it as an activity in the schools, not to mention all the impact it has on emotional development, emotional maturity, social skills, stick-to-itiveness, things we typically don’t measure in school but which are hugely important in a child’s ultimate success.” (….)

The question, according to neuropsychologist Nadine Gaab, is not simply whether music instruction has beneficial effects on young brains. “There’s a lot of evidence,” Gaab says, “that if you play a musical instrument, especially if you start early in life, that you have better reading skills, better math skills, et cetera. The question is, what is the underlying mechanism?” At her lab at Boston Children’s Hospital, Gaab leads a team of researchers studying children’s brain development, recently identifying signs in the brain that might indicate dyslexia before kids learn to read. Gaab and her colleagues are also looking for connections between musical training and language development. (…)

© 2022 Break for Music
Powered by UnitedThemes